I Bleed: a decade of song 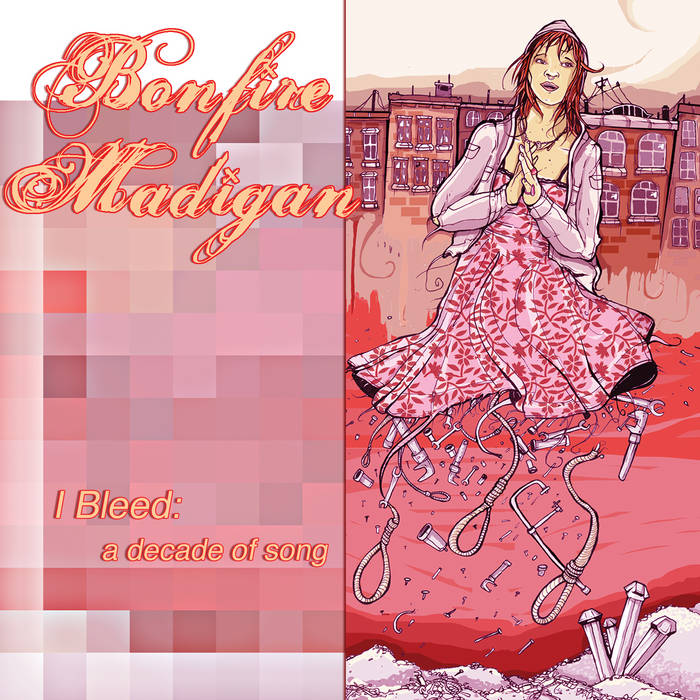 mandalyn23 i have been a huge Bonfire Madigan for OVER a decade, and it's great to have all these great songs in one collection! 😁💕🎶
Much Love!

I bleed is a preserving of songs. All you curious for mad material this is a conduit retrospective for you for all of us to share + spread … To help indie artists for every 2 cd’s or books or tshirts you purchase direct from us at shows, from website go on and make, burn, spread one for your own. this direct support, mobilization and resources will help to get these titles back in circulation and continue the sustainable incremental change. Plus continuing putting us on the road with new tunes, releases and cohorts to share. Purchase direct Take stock in a biodiesel b.mad bus: co-op, profit share style. Extinction = Myth. Separation = Illusion. Slip. Swarm. Soar. Inch x Inch. Emancipation = Participation. Harm Reduction. Homes not Jails. Food not Bombs. Incremental Continual Change. Sustainability. Earth first. Profits last. Keep on the conspire. We are the ones we’ve been waiting for. Bleed your song. Oh Yes, We are a Bonfire. MoonPuss UniVerse 3128-16th Street No. 244 San Francisco, CA 94103 BonfireMadigan.com


I opened the door to the now defunct legendary Portland, Oregon all-ages venue 'The X-Ray Cafe' and went inside, only to find 25 sets of little eyes all glaring at me. The loud creak of the door had intruded on the delicate beauty of a song being performed by the duo of young teen women whom I had also come to
see: 'Tattle Tale'.
My initial embarrassment was soothed when the door scenario kept repeating itself over and over again throughout their tranquil set. At least I hadn’t also been loudly talking or rejoicing with friends, as many of those who followed had been. To their credit, Tattle Tale soldiered through each interruption unperturbed. Barely raising their eyes, and never stopping their songs mid-tune. That in itself seemed to display a maturity well beyond their years. But what really struck me was the music itself. Magnificent melodies and harmonies flowed from the
pair. These combined with musicianship and a lyrical intensity that seemed impossibly developed for any still so recent to life itself.
When they concluded I approached one of them to offer my praise and invite them to play live on my radio program. That’s how I first met Madigan Shive. Tentative plans were made, but by the time we had discussed came to be, Tattle Tale had ended.
Madigan offered to play on the show solo, and I agreed. Listening in the headphones and viewing her through the double glass of the adjoining studio we
had set her up in, I was astounded all over again. Without a teammate to play off of, it was all on her. The new songs were even more powerful than before. They had a sweeping majestic quality that seemed symphonic, albeit it was just one girl and her cello. Thus was the birth of Chambercore.
Since then, I’ve seen Madigan play in many venues, both large and small. From a free show in an unfinished attic, performed mainly for the attendees of the 'Rock & Roll Camp For Girls', to formerly noisy nightclubs, now hushed in reverence.
Both by herself, and with the rotating ensemble of superior musicians collectively identified as ‘Bonfire Madigan’, I’ve seen her convert neophytes into true believers. It seems almost surreal that so much musical might can emanate from such a diminutive frame. My conjecture was that she must be constructed entirely of talent. The pure.
I theorized that if I could simply chip off a small piece to consume, that I too could then make beautiful music. That is what led to the restraining order.
So although I’m no longer allowed to partake of her grandeur, as for her music, it receives my highest recommendation. However, in closing let me report that
the wicked little wench regularly cheats at foosball. NO SPINNING ALLOWED!